“We need to develop new narratives to understand and appreciate urban watersheds and how they function”  -David Fletcher, Flood Control Freakologies, The Infrastructural City

Minimalism, as an artistic movement,  is characterized by a particular set of aesthetics and sculptural works.  ‘Minimalism’ refers to the idea of reducing the artwork to the minimal amount of surfaces, shapes and textures, avoiding references to anything beyond itself as a physical, spatial object. This includes the avoidance of an embedded narrative, metaphor and context.  Its forms are starkly geometric or platonic, devoid of ornamentation and generally lack hierarchy amongst elements that consist of neutral, or blank industrial surfaces.

The minimalist genre is just as often applied to design, including Mies’ influential ‘less is more’ axiom.   However the term is rarely applied to civil engineering.  What if we approached concrete drainage channels through the lens of minimalist art works in the landscape?

In its heyday, minimalist sculpture largely thrived in the rarefied, architectural vacuum of gallery space.  Within such environments the only forces acting on the works were largely conceptual, via the weight of projective interpretations.  The work itself was physically untouched or affected within the architectural setting.  Donald Judd’s six reflective cubes are a great example of minimalist sculpture and this relationship.  The cubes are composed of flawless industrial surfaces that reflect back on the space in which it is placed.  Left untouched, the objects’ relationship to the controlled surroundings could persist unchanged in perpetuity.

But minimalist works placed in landscape exhibit more dynamic sets of relationships that actively test the conceptual and physical limits of the work.  In short, architectural space preserves such works.  Landscape does not.  Compare Donald Judd’s reflective cubes to the blank canvas of the ubiquitous concrete flood control channels.

[The minimalist sculpture writ large: neutral industrial surfaces, simple geometric forms, and no ornamentation or embedded narrative.  This could be L.A., but its one of many drainage channels in Albuquerque, New Mexico]

Chapters one and two of The Infrastructural City examine the legacy of 20th century water Infrastructure in Los Angeles, which as we discussed, was characterized by narrow, or unifunctional programming (conveying drinking water into the city, conveying storm water out of the city, etc.).  These infrastructures were not minimally engineered in the way we conventionally mean it (they are quite robust and typically sized to handle 50 to 100 year storm events), but they are minimally engineered with regard to program, revealing striking parallels to minimalist sculpture.

[Moonee Ponds Creek, Melbourne, Australia.  Before and after channelization] 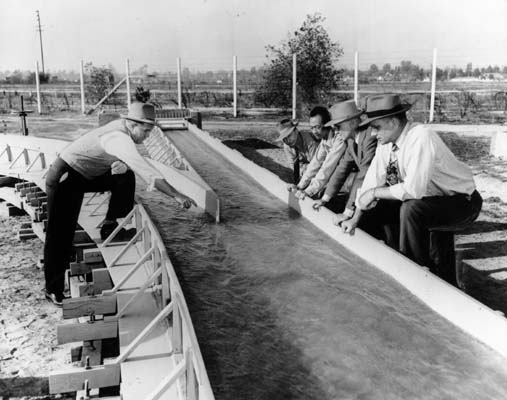 Design strives to achieve a certain agency – to affect.  Minimalist engineering does just that in a minimalist way: unifunctionally.   The form and materiality of concrete storm channels are built around one dominant parameter:  maximizing unobstructed flow.  Their texture and materiality are used to maximize the vectoral and the acceleration of landscape processes. 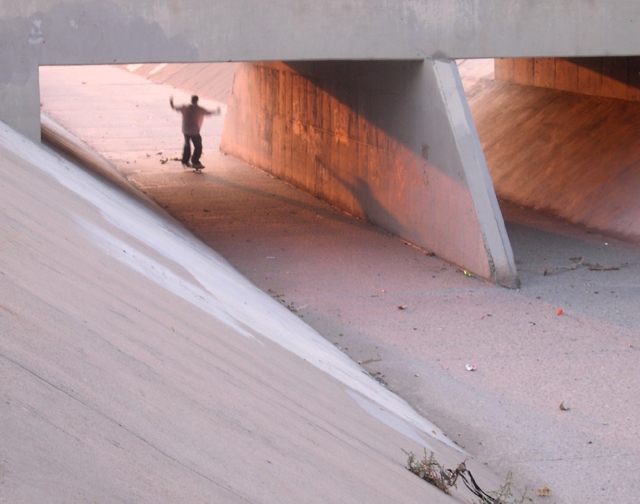 [Skating in an Albuquerque channel]

The momentary storm events these Infrastructures are designed for occurs only on rare occasions, thus leaving spatial and programmatic voids in the urban fabric.  And unlike architectural space, the voids are unavoidably occupied and co-opted.  Unintended heterotopias emerge. 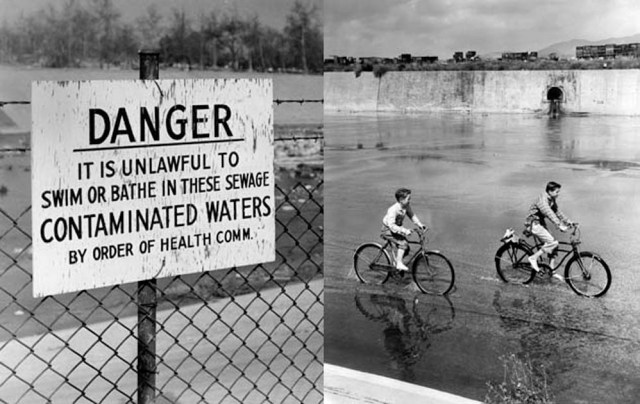 [above and below: LA River historic images] 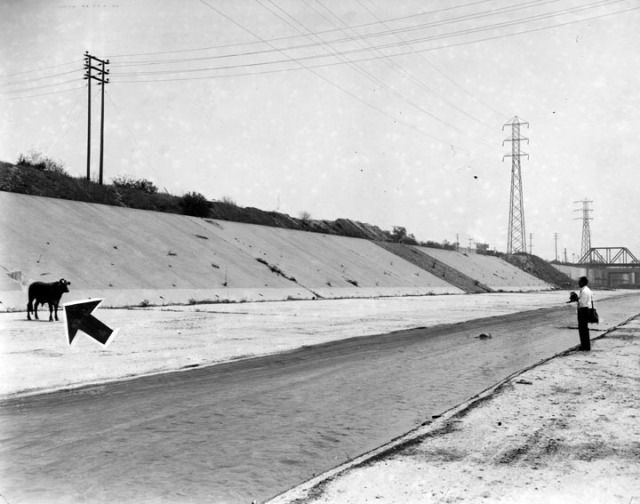 The singular precision of the infrastructure – a smooth, continuously sloped trapezoid extending to the horizon,  serves as an open canvas to reveal the sublime beauty of narrowly defined programs in exterior space.  The freakologies that David Fletcher describes: graffiti universities, itinerant shelters, weed colonies,  the addition of treated sewage, and other aggregates of self-induced entropy, are innate responses to thrusting such reductive program into the activated contours of landscape.  The emergent ecologies are the distorted forces of the expanded field re-asserting themselves as they claw out from beneath the thin concrete apron.  The expanded field here is less a cultural construct, and more the tangible, visible forces of urbanized landscape revealed through unintentional effects of monumental art works.

← Visual Histories of the Los Angeles River: the Past and Envisioned Futures
Ecological Urbanism, Reviewed →