By governor proclamation, May 16-22 has been deemed weed awareness week in the state of Oregon.  The proclamation sets forth agendas and actions to increase public awareness of weed-related problems as framed in terms of economic implications.  A conservative estimate finds that the damage caused by noxious weeds in the state of Oregon alone is in excess of $100 million per year. 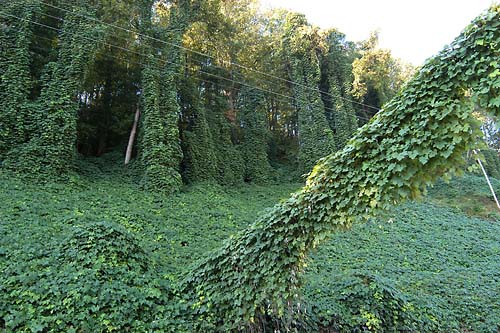 [Kudzu, just recently found its way into Oregon, currently discovered on less than a handful of sites.  Illustrating the contested nature of what embodies a weed, one private landowner in the state has refused to eradicate the plant because he uses it to procure a medicinal tea.  Maps of Oregon’s noxious weed distributions can be found here]

The designation of weeds (implying ‘pests’) grows more complex in tandem with the expanding influence of human-oriented habitat and the manufacturing of entirely new lifeforms; whether by intention or by accident.  Throw in migrating biomes due to climate change and the designation is further compounded.  On the one hand we’ve contaminated or endangered native habitats by introducing invasive exotics, and on the other we’ve created many places that only weeds can successfully occupy, thus questioning the ‘pest’ descriptor.  Elements as basic as street trees can exhibit this paradox, as many of them are foreign, horticulturally derived, or weed-like species in their native habitats, but are wonderfully suited to the torturous urban conditions in which they are placed – environs which native forest species often can’t hack.

Debating about what is a weed, where a weed resides in weed nomenclature, or what is native vs. non native provokes animated discussions.  Definitive or unilateral answers seem unable to encompass all the permutations of context, and as related discussions have alluded to (here, and here), one’s conception of weeds (plant, animal, human, other) is closely tied to a range of ecological models (or ideologies) influencing urban and landscape design strategies.

Oregon is perhaps more proactive in its efforts to battle weeds than other states, operating on the strategy that early detection and proactive eradication goes a long way.  As the above diagram illustrates, when a weed reaches a certain prevalence, there isn’t much that can be done about it.  It’s there for good and may be considered ‘naturalized’ and shift in prescribed treatment.  With weeds, all parameters are mutable.

The Monsanto Corporation and its products present a particularly vexing example of weed related issues that often reads like a science fiction scenario.  Their genetically engineering flora has been in the news lately for a variety of reasons.  The New York Times ran a couple of articles and debates regarding the rapid evolution of roundup resistant superweeds spawned by the heavy application of the herbicide on genetically modified (GM) roundup ready crops.  As scientists predicted from the outset, Monsanto’s patented terraforming engenders processes and lifeforms beyond the intended results born in the isolation of its research labs.  The cumulative extent of these mutations and the relative speed at which they are occurring is astonishing.  Whether one is for or against genetic modification design, Monsanto has definitively placed us onto novel, and irreversible evolutionary trajectories in a big way.  Superweeds are changing how industrial agriculture operates; requiring a return to more intensive, and environmentally destructive practices.  The new forms of life and landscapes that genetic modifications are inadvertently engendering are unknown; a designer ecology of surprises that Monsanto, in thinly veiled collusion with the federal government, has intentionally concealed.  By measures of total area and extended effects, Monsanto has probably designed and radically altered more landscapes than any other entity. But now that the new recombinant gene pool is out there  (and in all our bodies, if you eat any processed foods) what do we do?  If Michael Pollan is worried about it, likely we should be too. 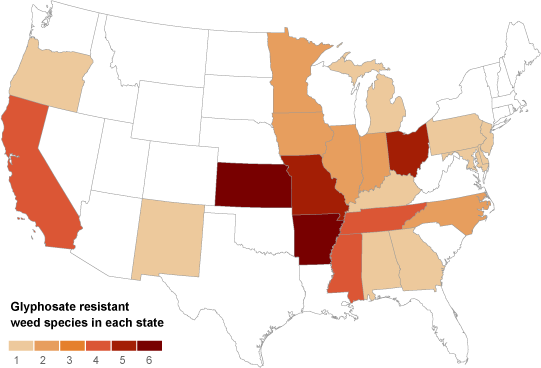 In related news, groups of Oregon farmers are filing law suites against Monsanto for introducing GM sugarbeets and alfalfa into the state (and elsewhere), which they fear will hybridize uncontrollably with non GM varieties, thus contaminating their organic crops (i.e. GM products as pests or weeds).  And then there’s the question of avante-garde corporate colonialization via ‘free’ seed exports to Haiti, debated at Civic Eats and elsewhere.  Monsanto itself has exhibited a truely unique and sublime corporate evolution, having come a long way in terraforming techniques since Agent Orange and DDT.