A Megacity, with a Big Wet Hole in the Middle 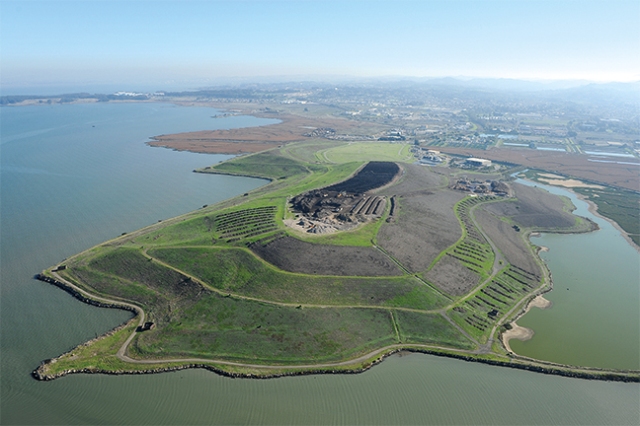 [“The West Contra Costa County Landfill in North Richmond (above) is one of the largest and oldest continuously active landfills on the Bay. It ceased accepting municipal waste in 2006, although it still serves as a compost and waste processing site and as a transfer station for shipping regional trash farther inland (currently to the Keller Canyon Landfill near Pittsburg). It serves communities all along the south shore of San Pablo Bay, from Crockett to parts of Berkeley. The pile that started in 1952 as bay fill has reached its permitted terminal height of 235 feet. Because of compaction caused by the weight of the mound, the waste extends 25 feet below sea level. Like most landfills in the Bay Area, WCCC is privately owned, most recently by Republic Services, the second largest waste hauler in the nation (after WMI), which in addition to owning around two hundred landfills across the country also owns the National and Alamo car rental chains and the used car chain AutoNation. The landfill still accepts dried sludge from the county sewage treatment plant located next door. The adjacent water treatment facility pipes its liquid effluent to the Chevron refinery, which evaporates it in cooling plants.“]

The image and text of the West Contra Costa County Landfill above come from The Center for Land Use Interpretation‘s just published book, Around the Bay.  The book is composed of spreads of oblique aerial images paired with explanatory text for seventy-three different sites along the Bay’s constructed edges.  The site descriptions provide a historical account leading up to what we see in the images.  As author Matthew Coolidge writes in the book’s preface:

San Francisco emerged, famously, with the Gold Rush and over the following century became America’s portal to the Pacific world. In this period the Bay’s shoreline developed as a regionwide port for defense and offense, with the most transformative period during World War II. In the postwar years the region sprawled, like Los Angeles. Today the nine-county Bay Area has more than 7 million residents. It’s a megacity, with a big wet hole in the middle.

Each landscape is keyed to a fold-out map of the bay found on the back cover of the book, so one could, potentially, use it to set out to explore these sites.  Yet many of the images likely provide more access to the many privatized, toxic, or otherwise publicly inaccessible landscapes that are pictured. These are glimpses one may never see while commuting on the wondrous Capitol Corridor.  The aerial dossier is a study in the striking contrasts of landscape uses spread along the unique geography of the Bay’s watery and dynamic urban border:

The Bay itself can be viewed as a geographic paradox: a place and a void. The collective “Bay” (composed of San Francisco Bay, San Pablo Bay, and Suisun Bay) both unites and divides the community of the Bay Area, giving identity to a region while separating its populace. The Bay is a back space where the hardened surfaces of the industrial city crumble into the water, as well as a shore front with designed parks and recreational marinas. It is intensely visited in places and nearly inaccessible in others; its beauty acclaimed, its dumping grounds unparalleled; its sparkling water refreshed from Sierra snowmelt, its sewer outfalls and urban runoff robust. Once intensely militarized, it is now, just as intensely, demilitarized. In a sense, the Bay is a natural entity, borne of great rivers draining the entire Central Valley of California; however, every inch of its shoreline today is the product of human activity, by either intent or incident.

Coolidge’s descriptions of these sites are fascinating and full of distilled information.  The more derelict and ruderal sites documented in the book – like the Alameda Naval Air Station, the Oyster Bay Regional Shoreline, the many landfills – read like a source book for speculative design studios; their programming revealed to be adrift and feral until their reformation as some other sanctioned form of urban productivity.

Tags: center for land use interpretation